“If your actions inspire others to dream more, learn more, do more and become more, you are a leader.”

Ricardo began his career at Wiegand s.a. de c.v. , where his role was Product Engineering Supervisor . While in this role he was responsible for all product blueprints, setting up new production lines and training people using master standard data to increase productivity, as well as for all equipment and plant layout development. From there, he joined Simplimatic Engineering based in Lynchburg, Virginia as a Project Manager. Wanting to make his mark on the material handling industry, Ricardo left to begin his own company, Conveyroll. Over the years Ricardo has evolved the company from a simple distributor to a full solution provider. He has partnered with many of the largest manufacturers in the world, including Interroll, Diafuku/Wynright, FMH and Roach Conveyors, allowing him to grow the company into one of the largest material handling integrators in Mexico.

Ricardo received his degree in Industrial Engineering from Universidad Regiomontana in Monterrey Mexico. He also earned certification in Warehouse and Distribution Center Layout, Transportation Modeling and Distribution Logistics Modeling from Georgia Institute of Technology. Ricardo was also trained and certified on sortation solutions from Hytrol Conveyors, Buschman conveyors and Automotion .

As Manager of Sales and Customer Service, Cesar runs sales operations for Conveyroll. As part of his responsibilities, he leads a team of sales representatives that follow up on leads and work with these customers to get them the products and solutions to meet their needs. Additionally, he works with a service team providing support to existing and future customers.

Cesar brings over 25 years of experience in the material handling industry. He joined Conveyroll in 1994 and has worked in several departments, beginning in Design, then moving to Traffic, Customer Service, Accounting Services and finally into Sales. Prior to joining Conveyroll, Cesar worked with Madereria del Norte in the sales department from 1992-1993, and he began his career at the Electron and Proton Company in the engineering department from 1990-1992. 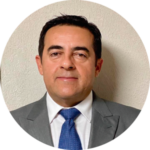 I am in a stage of my life where I am looking for a job opportunity in a company that is well established and constituted, where I can develop my experience and contribute with the knowledge that I have acquired during my life. Personally and professionally, I have the contacts and friendships that could help the company to have greater growth in sales, projects and achieve objectives for the company.

1997-2005 Own Business (Sale of clothing and accessories) Nuevo Laredo